Indeed, the tale of the Garifuna people has always been one of triumph over tragedy.

In February 2007 Andy Palacio & The Garifuna Collective released Wátina, an album that received unanimous acclaim and elevated the international pro le of the music and culture of Central America’s Afro-Amerindian Garifuna community. On the cusp of tremendous fame, Palacio passed away suddenly at the age of 47 not long after Wátina was released, leaving many to wonder who would continue bringing the voice of his people to the world.

With Ayó (“Goodbye” in the Garifuna language) Palacio’s band proves they are up to the task. With a lineup that consists of the best musicians in the fertile Garifuna music scene, The Garifuna Collective promises to carry the torch of cultural innovation and promotion passed on by Andy Palacio far into the future.

Palacio was already a national hero in his native Belize when he suffered a heart attack and stroke in January 2008. His premature death devastated his fans and community, but the musicians who had accompanied him and the new generation of Garifuna artists he inspired refused to let the story end there. 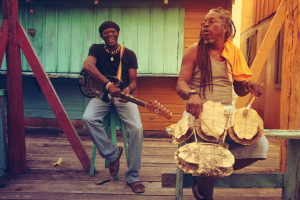 Indeed, the tale of the Garifuna people has always been one of triumph over tragedy. A minority culture in Central America, descendants of the intermarriage of Africans who escaped their colonial captors and Arawak Indians, the Garifuna have long struggled to maintain their unique language, cultural traditions and music in the face of globalization and discrimination.

Wátina and Ayó producer Ivan Duran notes,“ We are going back to the core values of the project, which is to present Garifuna music to the world, not in a traditional way, not in a museum, but as a living musical form. With Ayó you feel that spirit of being in the village with everybody singing along, everybody being a part of a song, not following a single singer or star. This album sounds like it was made by a band; there’s a group spirit that comes across more clearly than ever before.”

Even though they have lost loved ones, The Garifuna Collective’s membership continues to grow. In fact, the group is not a band in the traditional sense; it’s more of a cultural advocacy group. 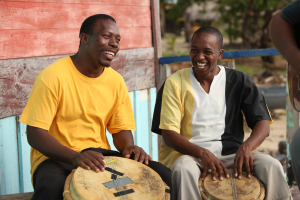 “Anybody can play, anybody can join, The Collective could have a hundred members for all I care,” notes Duran. Musicians young and old are allowed to participate in rehearsals, and the members chosen to be part of the touring group can change depending on circumstances.

The Garifuna Collective’s continued development is the direct result of Wátina’s success and a powerful homage to Andy Palacio’s impact. Duran concludes, “Since that album was released, there isn’t any more fear that Garifuna music is going to die out. Andy’s biggest legacy is just showing the way, proving that the world is interested in this culture’s music. It helped children in small villages understand that their culture is just as important as anybody else’s.

That sense of self-pride is a potent message that continues to echo across Belize and inspire new musicians to keep their traditions thriving.” Ayó carries on that mission and reveals that the well of Garifuna musical talent is deep and continues to be refreshed by new generations.