In addition to being the first locally produced release on CD, Keimoun is also considered by many as the most significant recording to come out of Belize, and was the first to attract international attention and acclaim.

Always ahead of its time, Keimoun is a seminal, trend-setting album that even after 7 years of its release is still gaining new fans. It was voted by Rough Guide as one of the 100 essential recordings from the Caribbean and Latin America. Andy Palacio, is not only Belize’s most popular musician and performing artist, but a serious music and cultural archivist with a deep commitment to preserving the values of his Garifuna culture. 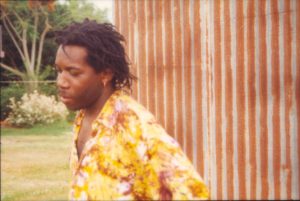 Born and raised in the coastal village of Barranco, Andy grew up listening to traditional Garifuna music as well as imported sounds coming over the radio from neighbouring Honduras, Guatemala, the Caribbean and the United States.

Along with some of his peers, he joined local bands even while in high school and began developing his own voice, performing covers of popular Caribbean and Top 40 songs. However, it was while working with a literacy project on Nicaragua’s Atlantic Coast in 1980 and realizing that the Garifuna language and culture was steadily dying in that country, that a strong cultural awareness took hold and his approach to music became more defined.

"I saw what had happened to my people. The cultural erosion I saw deeply affected my outlook," he said, "and I definitely had to react to that reality."

His reaction took the form of diving deeper into the language and rhythms of the Garifuna. “It was a conscious strategy. I felt that music was an excellent medium to preserve the culture. I saw it as a way of maintaining cultural pride and self esteem – especially in young people.”

And so began a unique fusion of Garifuna and contemporary music.

Upon returning to Belize, Andy encountered ” a renaissance of young Garifuna intellectuals,” who were writing poetry and songs in their native language. He saw the emergence of what was dubbed Punta Rock and enthusiastically took part in developing the form.

He began performing his own songs and gained stature as a musician and energetic Garifuna artist. During 1987 he was able to hone his skills after being invited to work in England with Cultural Partnerships Limited, a community arts organization. 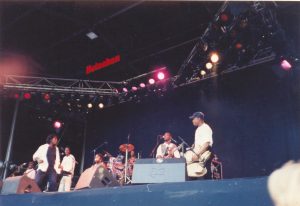 Returning home to Belize with new skills and a four track recording system, he helped found “Sunrise”, an organization dedicated to preserving, documenting and distributing Belizean music. While his academic background and self-scholarship allowed for his on-going documentation of Garifuna culture through lyrics and music, it has been his exuberance as a performer that gained world-wide recognition.

Since 1988, Andy Palacio gained enormous popularity both in Belize and abroad, having played before audiences in the Caribbean, the Americas and Europe and Asia. These include performances at the Festival Internacional de Cultura del Caribe in Cancun, Carifesta VI in Trinidad and Tobago, Carifesta VII in St. Kitts-Nevis, the Rainforest World Music Festival in Malaysia, Antillanse Feesten in Belgium, the World Traditional Performing Arts Festival in Japan and several others in the United States, Canada, Colombia, France, Germany and the U.K.

In December 2004, he was appointed Cultural Ambassador and Deputy Administrator of the National Institute of Culture and History.